October 05, 2005
Well, after the trauma of last week I can say without a doubt that the last seven days have been much better. Here's a quick rundown of my patented seven step program for transformation from gloom and doom merchant into street-strutting writer in residence.

The photos from this highly amusing little jaunt were pretty funny (see previous post). Sure, the African animals looked out of place. Okay, the kangaroos were just lying around doing nothing. I accept also that the millions of school kids shouting "Hello!" and "Where are you going?" was a bit much to put up with. But the sight of a bear having a swim or a couple of giraffes hanging out - ah, it warms the cockles of me heart. That being said, it was difficult to decide whether the zoo was for wild animals or for the fields full of wild kids I saw during my traversal of the zoo.

STEP 2: Get invited to an art exhibition

I got the call from Moonsun at the Australian Embassy informing me of an exhibition of photos by an Australian and a Korean artist and accepted gladly. The opening was at the Daelin gallery quite close to where I'm staying and was peopled by all sorts of artsy types, Australian diplomats and hangers-oners (ie me). We drank Lindemans wine - I almost cried. Also, importantly, I met Alexie Glass, a fellow-Asialink resident, who was leaving the next day. We went out after the exhibition and met a few other people including another Asialink resident, Larissa Hjorth, who is staying at Ssamzie Space in Hongdae.

STEP 3: Rendezvous at "The Captain of Pirates" 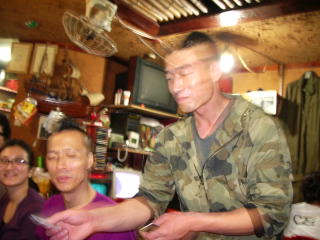 The next evening, after dinner with some of my students, I met Alexie, Larissa and others again at the delightfully-named and ultra-weird "The Captain of Pirates" (captain pictured above). This tiny bar in Hongdae features an aquatic/ Navy Seals theme and serves nothing but raw fish and soju, by the looks of it. The group was already quite rowdy and the cast changed endlessly throughout the night. Highlight was a song by local rock stars Gang Sahnae ("River and Mountain") and his drummer Lee Kee Tae, in honour of Alexie's imminent departure. Here they are below. 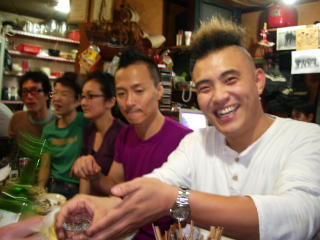 A close second in terms of memorable moments was Lee Kee Tae and I wearing toilet paper headbands. Enough said. Okay, have a look. 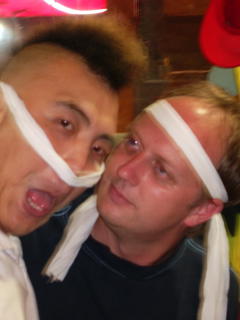 STEP 4: Check out the opening of a new river

Granted, not an everyday experience but the brand-new and ultra urban-environmental statement that is the Chonggyechon project sent Seoul into a delirious state of silly-pride and fireworks admiration. Highlights included lasers projected onto buildings and crazy street stalls, while the lowligth was the police response to a protest by a group of physically-disabled Seoulites who were complaining about the lack of disabled access to the river. Here is the police response to this group, who were all wheelchair bound and in late middle age: 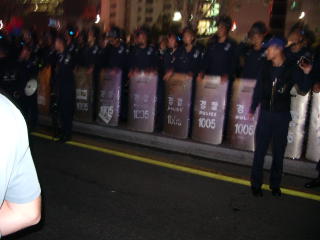 On Sunday, I met up with Larissa again and blabbed on about lots of stuff, then met my friend Jess who had arrived from Beijing after attending a conference on the Trans-Mongolian Express. I took her to my favourite BBQ pork restaurant and we drank beer and soju until the wee hours. So good to hang out with friends!

On Monday, which is the day Koreans celebrate the creation of the Korean landmass, Jess and I travelled 6oklms south of Seoul to Icheon, famous for its spa resotr. Justifiably so: the place is massive. Men and women are separated and each spa complex contains ten or so different "flavoured" pools, my favourite being the herb mint, the rice wine and the elusive "charcoal" pool, all heated at aproximately 40 degrees centigrade and guaranteed to sweat that soju out of you like you're a monkey stuck in a wringer.

STEP 7: Get a good night's sleep

That night, after having a few drinks to celebrate Jess's birthday, I slept so soundly that I did not wake up once. Until morning that is, upon which I found that my headache was gone, my strees levels were sub-zero, and I had just experienced my most fantastic week yet in Seoul.

sarah said…
finally you're living the real seoul life! I can't wait to get there, especially to the Captain pirate fish / soju bar. Make sure you get that toilet paper headband warmed up for me.

Popular posts from this blog